A bit of background on the evolution of energy systems

Whether for our domestic or professional activities, energy is one of the key elements that enable our societies to function. In addition to the fuels on which our mobility is based, the consumption of gas, and above all, electricity continue to increase and to discover new industrial or domestic uses (heating, hot water and now vehicles).

Historically organised in small and disparate local systems, the French energy system quickly evolved to a centralised design for electricity production and gas distribution units, to transport energy throughout the country for delivery to the different consumption localities.

This centralised management system, coupled with concentrated high power production or distribution solutions, has had an important impact on our entire energy system: our production is adapted to an ever increasing demand, driven by economic and demographic developments.

Most consumption is covered at all times by a regular production, essentially produced by nuclear power stations and renewable energies. Seasonal peaks are covered by more flexible methods (hydroelectric dams in mountain regions and methods deployed in the other regions, running on fuel and gas). The networks for conveying energy between the regions and local distribution points were designed for a one way use from the high production zones (countryside) towards the high consumption zones (towns).

This consumption profile has changed over time. The development of electrical uses (in particular heating and air conditioning) creating demands specific to certain times or seasons (hourly seasonal variations), creating heat-sensitive consumption peaks which are increasingly difficult to fulfil, in particular during particularly cold periods in Brittany and heat waves in the Côte d’Azur. In addition, the increase in specific uses relating to changes in our lifestyles (increase in household appliances, digitisation of services, popularisation of connected objects, etc) and the arrival of electric vehicles strongly increase the occasional and intensifying unbalance between supply and demand.

The State’s reaction to the environmental targets set by the European Union1 for 2020 resulted in a move to develop renewable energies throughout the country of France.

The production profile has changed progressively as a result: production has moved closer to the consumption areas but has become more variable, in particular wind and solar produced energy (known as “intermittent”) while being predictable.

Dependant on weather conditions, the production of sustainable energy is now independent of consumption periods.  Until recently, the decentralised and scattered implementation of renewable energies around the country, together with dense electric networks, managed to cater for the unbalance between local consumption and production.

At the same time, with the organisation of stakeholders and energy economics, the markets have had to adapt to these developments in society.

In this transforming energy landscape, the traditional centralised and unidirectional networks have met their limits and need to be updated, while limiting the investment costs for the populations2.

As building up these networks does not make sense either economically or for the society, the best solution is to integrate artificial intelligence into the networks through information and communication technologies.

These smart electric and gas heat networks, connected with consumers and producers (hence the name “smartgrids”), will allow for increased flexibility in consumption better adapted to the production of renewable energies, gradually eliminating their irregularity. The management of energy systems will be made easier through storing surplus productions of renewable energies (through the integration of electric or gas vehicles for example).

On a worldwide scale, whether we’re talking about large “developed” areas, already well equipped in interconnected electric networks, or about large “underequipped” areas (1 billion inhabitants still have no access to electricity), the challenge of transitioning energy systems (for carbon free production and an increasingly diversified management of uses), is a gigantic project, which is also a fantastic opportunity for developing an energy transition economy.

1 European Union climate and energy package with the 3x20 target: integrate 20% of renewable energies into the European energy mix, improve energy efficiency by 20%, reduce CO2 emissions by 20% in comparison to 1990.

2 Through energy bills and taxes.

Electrical grids and more generally Smart Grids by extension to all energy networks (heat, gas, water… networks) are all of the technologies applied to the systems upstream and downstream of the energy networks. Their aim is to efficiently integrate the actions of all users so as to guarantee energy supplies that are sustainable, carbon free, safe and affordable. They provide innovative products and services, and observation, smart analysis and data management technologies from the digital world to work with dynamic management and communication tools for energetic objects from the realm of energy efficiency.

Smart Grids cover the equipment and services relating to:

In short, Smart Grids are about optimising energy networks through digital technologies. The technologies, products and services apply to the entire energy chain and in particular they aim to solve the problems of balance between energy consumption and production. 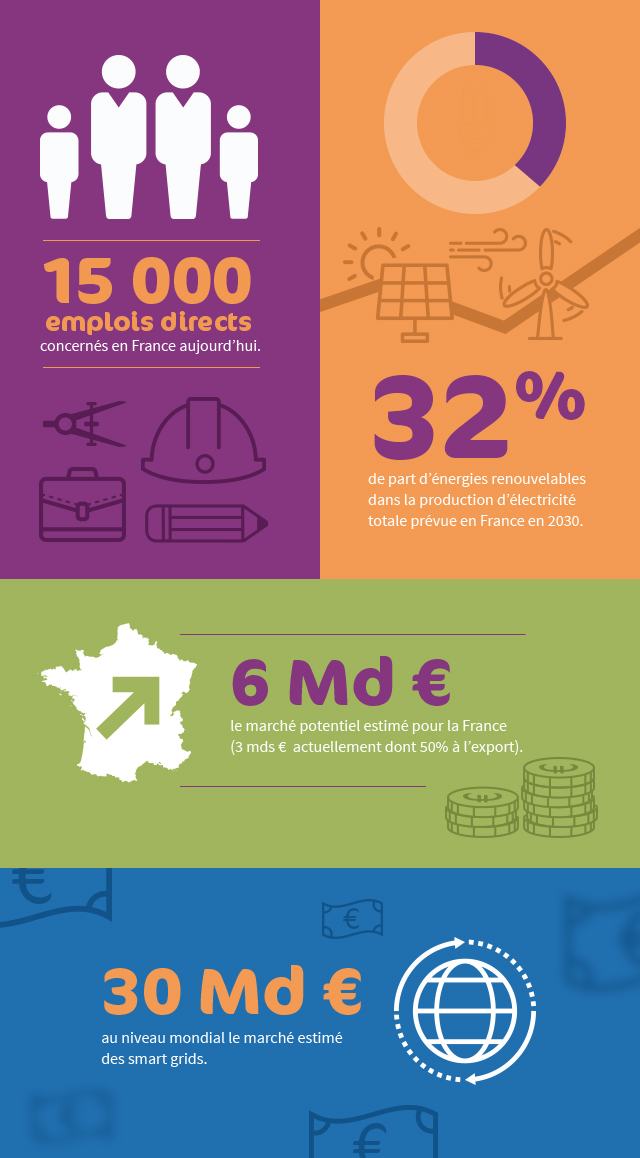 However, smart grids are not simply a link in the chain

In terms of energy transition, with very high midterm targets (32% of sustainable energy in the global electricity production by 2030) smart grids are an important asset in reducing our reliance on fossil fuels (petroleum, gas, coal) and towards a greater independence in terms of energy.

But they are only part of the solution that we need to provide in the short and midterm. This solution requires an individual and collaborative thought process on the impact of each of our daily activities: in how we move around, our consumer behaviour, how we eat, our type of housing, how we dress, what equipment we use. In other words, a global questioning of our lifestyles and how we can change them to make them sustainable.

Over time, smart grids will encourage us to become prosumers, fully capable of influencing supply sustainably through qualified and responsible demand and fully conscious of our responsibilities. On a larger scale, smart grids are preparing for responsible and autonomous “smart cities” which have an operational maturity on all areas (energy, transport and waste management), optimising resources through a flow of communication devoted to the general interest and the well-being of each and everyone.

“Draw me a smart grid”

To help you understand what a smart grid is, two symbolic examples of important projects for which SMILE is a partner: 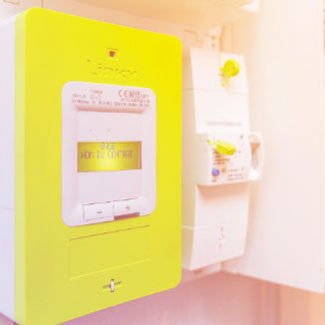 Implemented between Lorient and Ploemeur (56) on a test population of 975 inhabitants, Solenn is a project devoted to managing the demand for electricity and securing the electrical grid through the use of smart meters. Linky meters enable residents to see their consumption in real time, so as to better manage it. It also allows for the testing of the modulation of individual demands for power during periods of strain on the grid 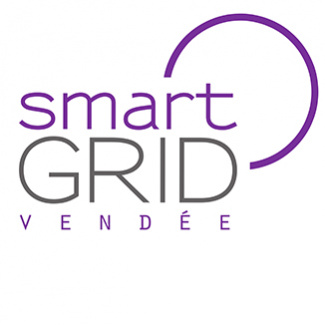 Deployed throughout the Vendée region, the Smart grid Vendée demonstrator has implemented innovative solutions for controlling and managing local sustainable electricity production and consumption (active management and valorisation of flexibilities). What’s different about it is that it’s one of the only projects in the world to include the entire energy chain: from production through distribution and to the end consumer (buildings, public lighting).