Back to news
Actuality #COVID19
Cooperation between Smile and 2 belgian clusters : TWEED and Flux50
Project Ouessant 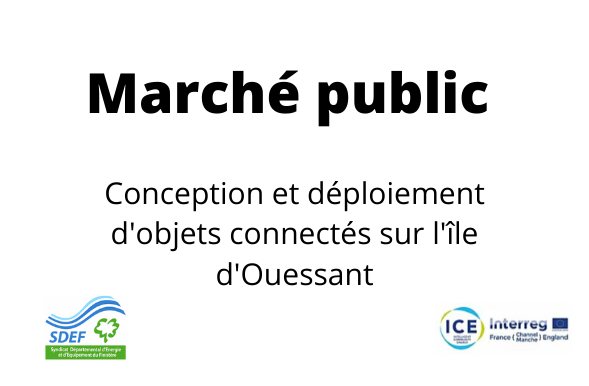 The SDEF is one of the partners of the ICE project of the European program Interreg France-England, which aims to design and implement for the isolated territories of the English Channel area, and in particular Ushant (FR), intelligent solutions in terms of energy by the deployment of “smart-grid”.

The energy transition from Ushant to reach autonomy is supported by the deployment of renewable electricity production facilities, such as a tidal turbine in the Fromveur Passage, or photovoltaic power plants on the roofs of public buildings.
The key issue of the energy transition lies in the synchronization of demand with production, which is intermittent by nature.

The SDEF launch an unprecedented experiment: communicating the status of the electricity network to inhabitants in real time using connected objects that will display a color (green, yellow or red). The volunteers to this experiment will become actors in the energy transition of the island by shifting certain consumption at favourable times, that is to say during low demand and high renewable production

The SDEF (Syndicat Départemental d'Energie et d'Equipement du Finistère) is a public institution in charge of organizing the public service on behalf of its members in the energy, digital and energy transition sectors. The SDEF regroups 269 municipalities out of the 277 in the Finistère department (29).

As part of the European Interreg France-Channel-England program, the SDEF is a partner in the ICE (Intelligent Community Energy) project, which aims to design and implement innovative smart solutions for the isolated territories of the English Channel area, and in particular on Ushant (FR).

Isolated islands and territories face energy efficiency, reliability and sustainability issues. This is due to their high dependence in terms of fossil fuel supplies for electricity production, the low transmission capacity of their network and their limited or non-existent connection to national grid. This situation therefore leads to very high carbon emissions, greater sensitivity to fluctuations in the price of fossil fuels and interruptions in supply.

The challenges in the ICE project include in particular the establishment “smart-grid” based on a production of multi-sourced Renewable Energy (Renewable Energy), energy storage and means of collecting, transmitting and analyzing energy data.

The energy autonomy of Ushant is sustained in particular by the installation of tidal turbines in the Fromveur, an area of strong tidal currents located between Ushant and Molène. The insular situation of Ushant contributes to increasing its potentials of photovoltaic production as well as wind power compared to a territory at the same latitude on the continent. These energy sources are renewable but intermittent, with a more or less predictable nature. The main drawback is that the energy demand over a day or a year does not correspond to the production of renewable electricity, requiring the use of fuel oil groups, controllable but highly emitting CO2. The ideal would be to be able to match demand with production, in order to limit the use of fossil fuels.

Among the action plan for the implementation of smart-grid on Ushant, one of the actions carried out is to give the possibility and motivation to the inhabitants to shift their energy consumption to the most favourable periods, namely periods of high renewable electricity production and low demand, and avoiding consumption during the least favourable periods, namely periods of low renewable electricity production and high demand.

To do this, this action is based on the real-time dissemination of information on the state of Ushant’s electricity network using connected objects distributed and installed among voluntary residents. The electrical network information will be provided by EDF SEI to the SDEF, which will transmit the information to each object using a communication infrastructure deployed as part of the Finistère Smart-Connect project. In practice, the information will be sent to the objects by radio wave via LoRa technology.

Two types of objects were selected:

•    A simple and educational object that changes color, using for example an LED bulb or a mechanical system.

•    A display that provides more information for informed consumers. It takes home consumption information via the electric meter, and the color qualifying the state of the network. More precise information allows the user to quantify its impact.